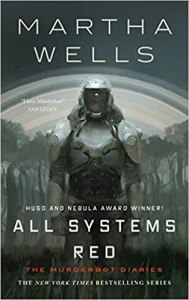 Our All Systems Red discussion was an after dinner mint! Martha Wells kicked off her Murderbot Diaries with this well received adventure novella. Weighing in at just under 100 pages, it is reputed to be a potent and accessible gateway drug into her subsequent novels.

David: We’re here to talk about murderbots!
Meg: I chose it for something fun and short to end on. It swept the big awards for best novella: Hugo (judged by fans), Nebula (judged by pro writers), and Locus. So there’s a kind-of consensus across the industry for this one.
Suhail: Going in as a novella is a good way to not compete against the novels.
Meg: It’s an interesting publication model. It was published as a series of four novellas, now available as a box set. And now a new full-length Murderbot novel. It’s a good story, plot driven. It works with conventions and does not stretch them. It owes a lot to Dick with a murderbot that has agency. An android forced to deal with humans and to act human.
Suhail: The murderbot as a narrator is tiring. It never describes visual settings. It doesn’t characterize the humans. (Which makes sense from the character perspective, because it is a murderbot and is uncomfortable around humans.)
Nikita: It reads quickly, with a consistent voice, in low-register language. It didn’t deliver on an ideas level that I like, or on a language complexity level – but it was readable. Granted, I’m a stuffy academic.

Click to read about the (totally unrelated) TV show.

Chris: It’s meant to be relatable.
Suhail: It can be relatable and written better. A character model (the way PKD uses schizophrenia as a character template for Rosen). The character model here that makes the murderbot make sense to me is: “teenager.” The murderbot is a teenager here, an awkward person very uncomfortable with itself, and just wants to be left alone and watch movies.
Meg: There are gamification elements. Murderbots visual setting becomes the HUD geography of icons.
Suhail: The groundwork for character complexity is laid.
Meg: The pain the murderbot feels comes from its human parts. It struggles with that.
David: It’s like a Sliders episode. An alternative universe where Golden Age schlock never happened and people are still writing in the spirit of Asimov and Bradbury, and it’s winning all the awards, and she’s a woman.

Chris: She’s being kind to the adolescent reader. A network communications procedural, like a VR Law and Order episode. Emotions and empathy in the book are all expressed toward the murderbot. Reminds me of Kristine Kathryn Rusch, author of “Retrieval Artist.” She’s a very particular proceduralist, which is sometimes a strength, and sometimes tedious. She’s very prolific.
David: Was there a light hearted moment in this story?
Chris: I liked the way it shirked its job while trying to watch TV.
Nowell: I was totally entertained. I’d read more. It’s fun. It kept me interested, like an action movie. I like that it was short. It was like an original series.
Meg: I’ve read 3 of them, and root for the character more in each one. It has increasingly complex moral problems and dealing with its past.
David: Question: Why robots? Why are so many sci fi stories doing robot?
Chris: It lets us explore caste systems and slavery regimes.
Meg: Robots explore themes of slavery, ownership, colonialism, and othering; even gender and race exclusivity. But the robot here also internalizes those hated characteristics and feels self-loathing.
David: I think robots in sci fi are about psychology. A metaphor for our own programmatic behaviors and attitudes. Why do they do what they do? How do they deal with pain? Do they make moral decisions?
Chris: Constructing its own subjectivity out of the media it is watching.
Nikita: A lot of body anxiety. Denial of death, anxiety about being in a body. A kind of neoplatonic alienation of the body, just a with to become a disembodied eye.
Suhail: Like a teenager’s body anxiety.
Meg: Its emotions are the only thing that cause it pain, and it wishes it didn’t have them. But it struggles because the feelings are there no matter what.
Nikita: Dick gave a new dimension of paranoia to the robot, and it’s so refreshing. That paranoia is here.
All: HAHAHAHA! 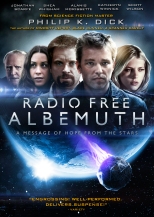 We took a tangent into the Portland protests and newscasters describing the unidentified federal agents’ activities as something out of a Philip K. Dick novel. David shared a Seth Meyers clip referencing PKD.
Suhail: If Dick was alive for this, he’d be insufferable right now.
All: HAHAHA!
Chris: A Jungian psychologist Robert Moore who identified 4 archetypes: king, warrior, magician, lover.
David: I have an idea for a course called Man Made Man. It’ll rest on Frankenstein and Genesis, etc.
Meg: Check out the LeGuin documentary. It’s been trimmed for American Masters. It highlights her contribution of making sciences like psychology and social science as the science bases of sci fi instead of technology.
Suhail: I love sci fi that uses psychology and social science as its science bases instead of just technology.
Recommendations that followed in that vien:
Alfred Bester’s short story, “Fondly Fahrenheit”
Ursula K. LeGuin’s “Vaster Than Empires, But More Slowly”
Theodore Sturgeon’s “More Than Human”

Thank you for reading! Reading rules!