Last night’s Poetry Cloud discussion was the bubbles rising! Inventive, playful, manga-like. Three folklorish characters play out a science fiction stage drama: a poet (farmed for consumption), a dinosaur (which eats poets), and a god walk into a parsec wafer with a wicked big chandelier…

“I’ve noticed you think yourself noble and pure, and others to be beneath your notice. Very interesting feelings for a little fowl from a feedlot.”
“Thus is the way with all poets.” Yiyi straightened himself in the pocket, proudly holding his head high, though he knew that Big-tooth could not see this. 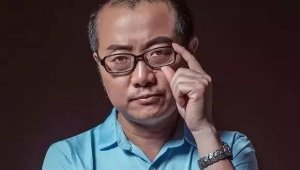 The conflict of the drama is: Can technologically enabled omniscience ever plumb the depths of the human inner world, the mysterious journey of being? Even one so lowly as a poet bred in a feedlot, for being human, brings something to the universe that even the god can not surpass. It’s a dare, on the poet’s part.

P.1082 “Why is the Devourer Empire still struggling in the atomic age after 80 million years of existence?”

P. 1082 A question posed to the god from the poet YiYi, “Does art exist everywhere in the universe?”

YiYi: “This has nothing to do with technology! This is the essence of the inner world of the human soul, and is unsurpassable!”
The god: “You say this because you are ignorant of the power that technology could eventually bring.”

The inner world of the human soul is not a gradated or quantified place. When you’re there you are there. There is no increment, no surpassing. The process and substance of that inner place can never be comprehended in it’s totality. It is nothing that can be encompassed, codified, stored. The poet presses on, challenging the god, ever so subtle, harmless:

“Human art to you is merely a flower carved in stone, and you cannot overcome this obstacle with technology.”

And the god takes our trickster’s bait. Goaded by YiYi, the god wishes to “surpass” the greatness of the poet Li Bai. He transmutes into a poet’s body, a clone of the great Li Bai, that part’s easy. See how easy it is to be human? Then he whips up all of the materials he needs to write, from quill and ink to paper and desk, only to have writer’s block, overcome with thought at creating. He has a drink to loosen up. And like fire water it takes over his life.

P. 1085 The poet is winning. He says to the god, “I still believe what you face is a transcendent art form.” And such a thing , he implies, is like kryptonite to a god.

The god-clone-Li-Bai gets into the natural life, the “true folk culinary art that had been lost long before the Earth was annihilated.”

Suhail: As an aside, Zelazney does this a bunch, transmigrating back and forth between organic matter, mechanical matter, and transcendant space. For example, his short story “For A Breath I Tarry.” and in both books Lord Of Light and Creatures Of Light And Darkness.

David: The former god, now party poet with writer’s block, says Bah, I’m all powerful. I’ll build a machine to write and store every poem that will ever be written! The poem greater than Li Bai’s work will be in there, guaranteed. So HA!

The god gives a computer’s answer: “I will write every posssible pentasyllabic and heptasyllabic poem.”

P. 1084 The “output portal” an E=MC2 door that draws energy from the universe at large to build, well, anything.

Suhail: Like the autofac in Dick & Zelazney’s Deus Irae. 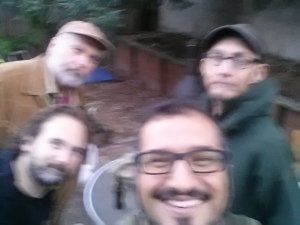 We learn that the god is an individual, that it is not part of a monist collective mind. It is merely an idiosyncratic individual from a species so far in advance of the dinosaur and human species that it’s transcended matter and is basically a god for that reason. And it’s a kind of art historian, which is why it’s so interested in this poetry thing.

David: The characters were flat.
Chris: Maybe they were folkloric.
Suhail: Hmm, I can see that. I like the way the story is crafted, the small details built in to the plot for example the way the tables turn between the human and the dinosaur. Though it has no bearing on the trajectory of the story, it is a cool play.
David: Still, the characters are there to deliver something, they’re symbols.
Chris: It’s no Canticle For Leibowitz, but let’s look for other layers of the story. What are some other ways to understand it, coming from a culture where the individual is not as prized, not as much as we’re used to. So, who’s the big technological god who starts picking and choosing the fates of others? Does it always know best?
Suhail: I like what you said earlier about the Loory comparison, because he does seem to have just thrown these characters together, then they acted, and he followed the consequences of those actions. There’s a weird dreamy continuity that way.
David: Yeah, there is color in them that way. He’s not preaching something, the story is crafted to be good. Basic three act structure.
Chris: And the trickster lands on his feet. The poet gets the girl by the river.

Cool, funky, technical “spaceship earth” stuff. “Land doors” and manual satellite launches on the Lagrangian Points, drifting weightless from north pole to south in a direct line through the center. But mind the white hole lamp acting as a sun. Neutron matter reinforcement rings of longitude and latitude.

The final conundrum, basically setting them back where they started: Now that we have all possible poems, how do we recognize and find the great ones? The god of course says he’s now working on software to parse out the quality poems. The poems do not exist until the poets discover them in the fullness of time, by writing. Basically the same problem poets have always had.

Hands down our favorite story of the summer. A meditation on infinity and everythingness. Quirky characters that somehow fit together just right. It had colorful, inane, meticulous fun with solar system terraforming concepts. Reorganizing matter on an enormous engineered scale, turning planets and suns into quantum computers the size of planetary orbits. The technical stuff was thought out, no matter how fantastic. That was fun for the detail geek in me. 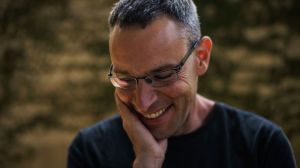 David: It’s like a Ben Loory story on science acid.
All: HA!
David: The god can only outdo humans by becoming human itself.
Chris: The folklore quality of the plucky poet, ordinary guy that he is, turns around the fate of the whole human race.
David: In the Asimov tradition in some ways. It was fun. I laughed out loud, loved the flowing imagery. The levity, the absurdity was great. Letham has that…I think a lot of writers got it from Dick. Phil Dick, even in his most dreary scenarios, maintains that absurdity bordering on humor.
Suhail: It was nice to read a longer story. Too many of these were too short.
Nowell: Just a splash. There was no space to go anywhere with them.
David: Yeah, let’s do books again next summer.
Chris: Definitely.
David: Maybe four books, two weeks apart.

Join us next time, when we round out the summer with our screening of 2001: A Space Odyssey, followed by a discussion to compare versions, and revisit any favorite moments from this summer. Thank you for reading. Reading rules!