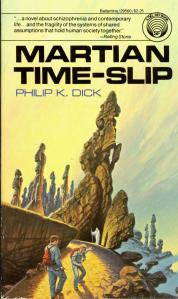 Last night’s Martian Time-Slip discussion brought some dark, fascinating things to the surface! It was a privileged to have two hard-core Phil Dick scholars at the table (Erik Davis and David Gill), because every scene, theme, and psychotic hallucination in the book implied the author behind it – and these gents knew Dick’s life story and publishing history intimately enough to produce some gratifying insights.

We traced interesting aspects of Dick’s personal life during the time he was living in Pt. Reyes writing this book (married to Anne, father of one, abusing amphetamines, the vision of the dark slotted face mask in the sky, and writing nonstop like a demon as his marriage deteriorated). Much of the psychological environment of his personal life glares through in this Bradbury-inspired Mars novel.

A word of warning: the book is depressing, though it has key moments of humor. Also, it ends well for a Dick novel, which is a huge plus. Martian Time-Slip reworks a lot of the themes of overlapping identity-realities in ways similar to Ubik and The Three Stigmata Of Palmer Eldritch (How, for example, a particularly aggressive or powerful personality can actually alter the contours of the reality of less-aggressive personalities around it. Also, the notion that emotions are types of AIs or alien consciousnesses that inhabit human beings to see their own greater will done.)

Although, the conundrums in Martian Time-Slip are not created by technology, but rather by psychological states of mind like autism, schizophrenia, and the bleak mood that descends upon a community which has experienced a suicide. Also, in Martian Time-Slip, Dick executes the overlapping identity-realities with the more formal narrative control. In Ubik and Eldritch, it constantly feels like the ground is falling out from underneath the reader’s feet, to the last moment. Here, it holds together better. The character web in this book is impeccable. The plot, almost non-existent. Now for the discussion notes!

Gill: like Ballard, the culture is so horrifically banal that you’re horrified by that.
No character is really attached.
The plotting: On Meg’s first read, she noted that PKD was writing this book by the seat of his pants, all of these disparate characters, but then he pulls it all together. He’s writing as fast as he can, with almost no revision. A masterpiece of improvisation where the mind is the creative device.
Gill: Shortly after publishing Martian Time-Slip, Dick had a serious bout of writer’s block. During this time, he wrote letter to a fan about the system he uses to build his novels.
In chapter 1, establish the sub-human, then in the next passage introduce the hearty everyman, then in the next passage introduce the power-drunk bossman, etc. There is a very logical progression, an order to Dick’s character web weaving process, right down to how many syllables belong in each character type’s name. And he spelled it out in a letter to a fan.
Erik, added “The logical relational thing is, how tropes keep coming up: the communication device that comes down, the repairman, the mixture of good/bad boss.”
Dick: “schizophrenia is the savage within the man.”
Dick’s use of horror, almost unintentional, but vivid. As though the horror is a personal account of his subjective experience of reality.
Using Manfred to critique normalcy.
Arnie is the one who keeps putting up walls to stop the Manfred affect, but he is the one who ends up destroyed by it. Unlike Jack, who is capable of reflection, and has insight and even notices when Manfred’s world is beginning to take over his own.  That in itself makes him escape Arnie’s fate.
In capitalist utility land, the move toward meaning is to look at pure negativity, the pit. The horror is a call toward meaning, but if you go all the way, it will take you to the flip side of the capitalist utility land.
Distillation of dick’s economic philosophy
“hated bigness per se. Bigness had destroyed the small business way of life.”
Chris: “How does Dick really feel about Arnie. He tries to redeem Arnie several times; does he identify with him?”
Gill thinks it’s Dick’s way of making round characters. Suhail thinks Arnie is a significant portion of Dick’s personality.
Heavily autobiographical, according to Gill. So much of this book describes Dick’s life in Pt. Reyes to a T.
Erik: “Dick never ever in any book describes the physical beauty of a place. Never describes any sort of natural landscaping in even a gently lyrical way. And the sublime is a source of horror for him, it is the epitome of meaning in the midst of the nothingness, that awareness of being in the pit of darkness is the only meaning.”
Meg: concerning Dick’s contempt for the sublime, the sacred ritual spot is called Dirty Knobby.
HA!
Self consciousness about capitalism, environment, culture as a deforming force (the UN is gonna come in and fuck everything up), the public school institution of normalcy. Kids need stable adults to grow but all the adults are fucked up. Not just the knowledge that these people have, but the values.
Heliogabalus: a note in the American library edition – A 3rd century Roman emperor who assumed the name of the Syrian sun god.
On the sublime tip, chapter 4, the description of Manfred as a mysterious creature from a another world “a divine and dreadful place beyond.”
Wrap up: One of Dick’s best books, merits rereading, but it’s a gloomy ride, so decide for yourself.
Thank you for reading! Reading rules! 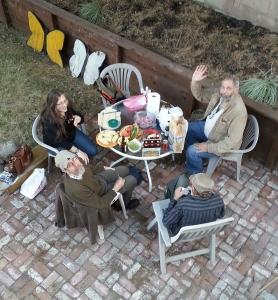 See you next week!

Suhail Rafidi is a novelist and educator whose works explore the destiny of human values in a technological landscape. You can find him on Twitter, too, @shelldive.
View all posts by Suhail Rafidi →
This entry was posted in Book Reviews, Books, Science Fiction, Sociey and Culture and tagged david gill, erik davis, science fiction, science fiction writers, shelldive, suhail rafidi, writing. Bookmark the permalink.